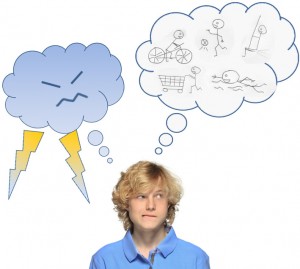 Freedom. We all want it. We want to have choice in our lives; it gives us opportunities, independence and a sense of control.

Now consider a child with autism. A child with autism may have a limited range of behavioral choices: he can only do what is in his repertoire. When my son Douglas was little his repertoire consisted of just four behaviors: running around, shrieking “Deeeeee, deeeee, deeeee,” spinning, and hitting himself or others. He was a nightmarish child to care for. If we talked to him, his response was to plug his fingers in his ears and run away.

I know now that he was only doing this as a self-defensive reaction to the confusing and overwhelming stimuli that bombarded him. These behaviors must have been self-reinforcing, or they would not have continued. Creating his own noise, engaging in repetitive movements, destructive behavior and even self-injury must have been reinforcing to him, since we know from the findings of behavioral science that behavior that is repeated is behavior that has been reinforced. It is very sad to think that a child finds his environment so overwhelming that it is necessary to engage in these types of behaviors as a way to cope.

My Son Was Not Happy While Overwhelmed

I didn’t believe that my son was happy while engaging in these self-stimulatory and destructive behaviors. I believe that these behaviors stopped him from being able to learn and interfered with basic functional skills. These behaviors sucked him into a downward spiral which he was unable to control or get out of, and they caused pain, anger, frustration and despair in the rest of the family. How could that be good for him or for us?

Douglas had a limited set of behaviors and no self-control. Like many children with autism he had sensory issues and could not tolerate much of what goes on in a normal household. I eventually figured out how to get around his sensory issues and teach him some new behaviors. Once he had started to learn a few new behaviors he began to realize that he had a choice in his response to his environment. When we can manage our environment we are calmer, happier and more able to make good choices. When we have choice in our lives, we have freedom, independence and a sense of control. It is the same for our children (whether they have autism or not). The more behaviors they have in their repertoire, the more choices they have about how to respond and communicate and relate to others.

One of the tools that I found most effective is called TAGteach. This is a method of communication that uses positive reinforcement and an event marker to tell the child that he has done something correctly. The event marker that I use with my son is a click sound made by a handheld clicker (or tagger). In TAGteach, the marker is called a “tag”.

This wonderful tool, the tag, circumvented all the troublesome sensory issues that plagued my son and hampered our efforts to communicate with him. With a single tag (click) I could now tell him, “You did something right. Now you are going to get a treat.” Once we had that communication link established, I was able to reinforce all kinds of physical movements that I eventually shaped into good functional behaviors. Here are the ways that I observed the TAGteach method helping my son, despite his sensory problems.

First, the tag is very precise, so it targets only one specific physical movement at a time; the child is not asked to do a complex thing or a chain of events. The focus is on “break it down” to the smallest possible muscle movement needed.

Second, the tag is always the exact same neutral sound, unlike spoken words. The human voice conveys a lot of emotional information (how often when we call friends we can tell, from the instant they pick up the phone, whether they are happy, sad, tired or irritated). This emotional input can place an additional sensory burden on the child; the child has to try to figure out what we want, plus is aware of our mood/state of mind and has to cope with that. TAGteach limits the use of language. If using TAGteach with a verbal child, the explanation cannot be more than five words (TAGteach rule!) so there is not a lot of language demand placed on the child. If the child is not verbal, you don’t need to say anything at all, simply observe and wait for the desired movement, then tag the behavior and reinforce.

Third, as soon as the child hears the tag, he knows he will be getting a reward. There is no need for the child to do anything else: mission accomplished (until he does something else that is good and gets another tag and reinforcer!). There is no need for verbal praise. Words and spoken language, even if they are intended to convey praise, can again be a confusing auditory and emotional burden for a child with autism.

Confidence for the Parent

Fourth, as the parent gains experience and has success with TAGteach, the parent becomes calmer and feels more competent. This reduced emotional burden in the parent results in a lower emotional burden on the child. Plus, the child is gaining skills, so the overall situation in the home improves: this creates an upward spiral for the family.

Child Learns to Focus and Gain Control of His Environment

Fifth, the child learns to look for and watch out for the tag. His environment is now providing very helpful, specific information. The child has something beneficial to focus on, so he is experiencing growth, in very manageable pieces. With new experiences and new skills, the older and less desirable patterns of behavior decrease.

TAGteach is all about building skills in small increments, with lots of positive reinforcement. TAGteach allows you to deliver highly targeted reinforcement, and to deliver it at a very high rate. And, TAGteach gets around the sensory issues by giving the child specific information and reinforcement without adding confusing language and emotions to the child’s environment.

When my son gained new skills such as walking nicely with us, being able to keep quiet, being able to hold onto a shopping cart, he was able to go out with us to many places in the community. He started having fun at the playground, park, pool, and ice skating rink. His horizons expanded, and his difficult sensory behaviors dropped away. Sure, he still hops and bounces with excitement, but he can control that. He is a happy teenager who loves to go out; he asks us to take out and he enjoys visiting new places. He even went to sleep away camp for a week this past summer. I was able to give the camp staff a tagger, a few packages of TicTacs and my book that outlines his tag points and how to create new tag points. I could leave Doug with strangers for a week, confident that they would be able to maintain consistency and that he would be able to have a great time (which he did). Despite the fact that Doug is non-verbal, I knew that he would be able to engage in communication via TAGteach with his counselor, a certified Level 2 TAGteacher. I was so pleased and proud when the staff at camp told me that Doug was happy, cooperative, sweet and well-behaved.

You can read more and see some videos of Doug at camp at this link: https://autismchaostocalm.com/videos/douglas-goes-to-camp-tagteach-magic-in-action/

Now instead of the downward spiral of self-injury, self-stimulatory and aggressive behaviors, we are in an upward spiral of new behaviors, more choice and control for Douglas, more confidence for us and more opportunity for the whole family to enjoy life’s experiences. It’s quite a change from the early years.

Martha Gabler is the mother of a non-verbal teenager with severe autism. She lives in Silver Spring, Maryland with her husband and two sons. She is a graduate of Vassar College and the George Washington University. Her older son is at university pursuing a degree in mathematics. Martha runs a tutoring company called Kids’ Learning Workshop LLC, and is the author of the book entitled “Chaos to Calm: Discovering Solutions to the Everyday Problems of living with Autism.” Martha writes articles to help other autism parents solve or prevent behavior problems at her blog: AutismChaosToCalm.com