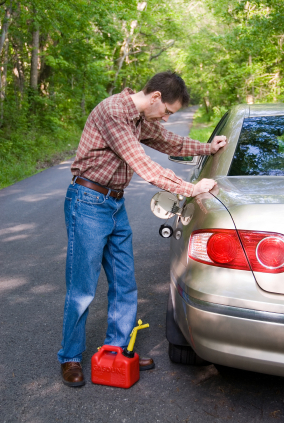 Your car has a warning system

We’ve all done this: pulled away in the car and suddenly noticed that the needle in the gas gauge is hovering on empty. Naturally, at that particular moment, it is always extremely inconvenient to stop for gas, but we have to. No one wants to be stuck on the side of the road with an empty gas tank.

Running out of gas is such an inconvenient and potentially dangerous occurrence, that car companies give us all kinds of warnings before disaster hits. The gas gauge tells us how much is in the car and we can estimate how much further we can drive before we have to fill up. If we ignore the gas gauge, the blinking FILL TANK light comes on. If we ignore that, we will pretty soon feel the car slow to a halt, and we are stuck.

So does a child with autism

Kids with autism also get stuck and have problems, but they too have warning systems. Their warning systems just aren’t always apparent to us. My son, who is nonverbal and has severe autism, was always sending signals when he had problems, but for a long time I was too dense to comprehend them. Finally, I began paying attention and learned how to read his emotional gauge and emergency blinking lights.

With my son, something I didn’t realize for a long time was his need for a food schedule with regular meals and snacks. In the early years, he often became angry and aggressive just two hours after a good breakfast. Eventually I came to understand that he wanted food, but I thought, “He just had breakfast. How can he be hungry now?” Well, he was hungry and when I finally agreed to let him have a snack, his anger melted away. I decided to observe when he wanted food, and eventually we worked out a precise timetable of meals and healthy snacks that coincided with his hungry times. Problem solved. Angry behaviors decreased dramatically provided we kept to the food schedule.

We got in the habit of scheduling errands and outings around the schedule, or making sure we packed food for longer trips. If we ignored the schedule, he was quick to remind us that he was having a problem with really awful behaviors like head-banging or hand-biting. These behaviors were his blinking FILL TANK light.

My son’s need was for food, but it could have been anything: more quiet time, more academic and behavioral supports, or higher rates of positive reinforcement. It seems obvious now, but it took me a long time to study my son, understand what his needs were, when he had them, and then devise a program to accommodate them. The emotional gauge and emergency lights were there all along, but I didn’t perceive them. When we had this piece of the puzzle worked out, we saw lasting improvements. Now he is a teenager and we still follow a schedule, but it is a much more relaxed situation. He is more flexible, because he knows we understand his needs and will take care to meet them. We monitor the emotional gauge carefully, and take action to keep his tank filled.