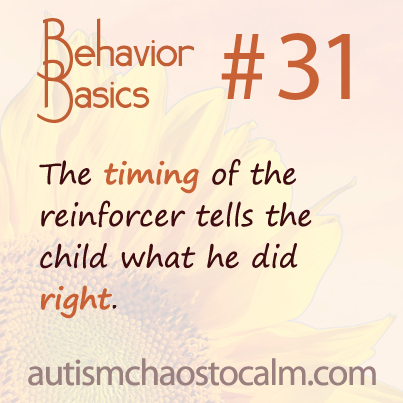 31. The timing of the reinforcer tells the child what he did right.

We have talked about how children with autism may have many behaviors (physical movements) going on at the same time.  At some point, the child will perform a movement that you want to see happen more often.  When this one specific movement is happening–in the blur of many other movements–the only way to distinguish it from the blur of activity is with pinpoint timing.  With TAGteach you can pinpoint that micro-second of desired action by pressing the tagger, and then delivering the reinforcement as quickly as possible after that.  The child knows that the sound means that a treat is coming, so the child pays attention to what he or she does that causes the sound to happen.  The pinpoint timing of the tag (click sound) gives the child information about which specific movement is earning the reinforcement.  When the child with autism knows exactly which behavior is earning reinforcement, he or she will do that action more often.

32.  Late reinforcement is ineffective for teaching a child, especially one with autism.

Children with autism often perform many behaviors in quick succession and in changing sequences.  When they are performing behaviors (physical movements) so quickly, it is a challenge for us to tell them exactly which behavior we want, and it is a challenge for them to figure it out.  Generally, people use their voices to tell a child, “Good job,” or, “That’s it.”  The problem is that words come out of our mouths a second or two after the child does the behavior, plus the words themselves take one or two seconds to emerge: this means a three to five second delay in getting information to the child.  In that three to five second period, the child will have performed several other behaviors.  How can the child figure out, in his confusing world, what that praise was intended for, even assuming he can understand the words?  The information is too late to have meaning for him.  The late praise and even later delivery of reinforcement will slow down the child’s learning process.  Why create confusion and delay when we can provide real-time, split-second information?  Delay is the last thing a child with autism needs.  Fast timely action brings much better results.