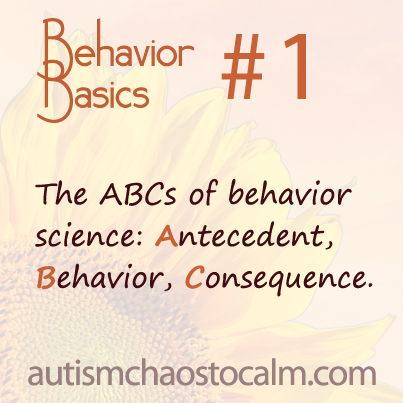 Behavior (physical movement of the body) occurs in a specific time and place. When studying behavior, analysts look at what happened just prior to the behavior (the Antecedent), the specific physical movements that the learner made (the Behavior itself), and what happened immediately after the behavior (the Consequence). For example, let’s look at this scenario: The antecedent: a powerful storm rolls in with thunder and lighting. Behavior: a little boy dives under a table and screams. Consequence: instructor comes over, comforts the child and gives him a lollipop. This sequence of events will have an effect on the future behavior of both the boy and the instructor. 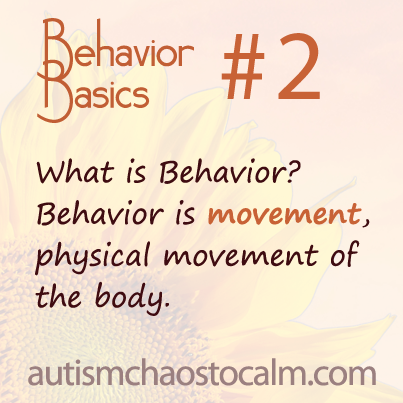 Behavior Basic #2: What is Behavior?

Behavior is movement, physical movement of the body.

Behavior is composed of physical movements of the body. Imagine somebody playing the violin: one hand supports the instrument, the fingers of that hand press on the strings, and the other hand moves the bow over the strings. Now imagine somebody hailing a taxi in New York City: the body leans toward the street, the head faces oncoming traffic, the hand nearest to the street waves at passing cabs. Every behavior we do is composed of anywhere from one to dozens of distinct physical movements of the body.